From the desk and mind of Arbiter Titan!

The Shonk overcomes The Beast from the East to face their psyche quest.

Back in March, The Shonk prepared a scouting team to venture to That London to gather information on the force that is Oh Sees, their quest was thwarted by the snow demon that was “The Beast from the East”. Despondency was soon replaced by anticipation when news arose of  a chance to pit our wits against this behemoth on a battlefield closer to home…..the date was set, we took no chances this time, we assembled the troops and set forth to our date with destiny – Bristol prepare thyself for a psyche assault 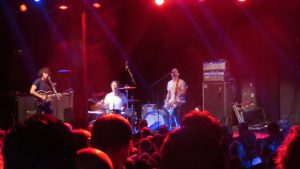 The first wave came at us hard: Flat Worms were a valiant adversary hitting us with a volley of sonic youth guitar, punk attitude and punchy vocals. They battered us but we were unbowed, bloody but not beaten. We had taken their best, they had rocked us but we were ready for more.

The main assault was now upon us, the four horsemen of the garage apocalypse stood side by side across stage front (well, actually two were sat down but…), each with their weapon of choice ready to inflict aural assault on our massed ranks. It began and immediately we all doubted that they were playing fair, surely these men weren’t human….

Bass man was underpinning the advance with a rock solid, unending barrage of sub atomic onslaught that seemed to have discovered perpetual motion. He was relentless, driving forward each track, laying down the base from which the others could deliver the knockout blows.

The drummers were obviously mechanical devices designed to work in perfect unison, attacking our ears with a two man, four sticked barrage. Working together they created a solid, seemingly impenetrable wall to beat us into submission. This rhythm section attack was both audio and visual, confusing us with synchronised movements and precise repetition, mesmerising a captivated audience into a trance.

Now their leader, John Dwyer, came at us with his guitar strapped tightly across his chest, firing six string screeches, howls, growls, screams and yelps in our direction. When we thought we couldn’t take anymore he unleashed a new weapon, bombarding us with wave after wave of synth squeals, warbles and squelches.   These assaults came at us from all angles, utilising advanced technology to send a volley of multiple sonic missiles at the same time. To further confuse and confound our ranks he told disturbing tales of strangeness, debauchery and evil. He told tales both old and new, we weren’t sure where we were, our subjugation was almost complete.

They had one last trick up their sleeves, up until now they had confronted us with a high speed onslaught, we were rocking but rather than finish us off with a flurry they toyed with us and took us down an even stranger path, everything got heavier, more surreal and, dare I say it, more progressive. They had beaten our bodies and now they were going to take our minds. They slowed things down, stirred our brains around with swirling synth oscillations and staccato rhythms. We were powerless, we had been bested, and we were out on our feet. One final blow with an almighty crash and it was done.

The battle had been epic, hard fought but it was over. Oh Sees were the victors but we had not been vanquished, we will talk for many years of our glorious defeat but we live to fight another day.

NIGHT OF THE LIVIN’ SAX PT3

Many months ago I got the hankering for a festival. I didn’t fancy the fast paced turbo charged carnage of Boomtown, a festival so amazing that you never see any of the acts you have […]