Music is an incredible and powerful tool and despite it existing for a very long time there are still gifted creators who conjure up new and exciting ways of putting forward their voice, heart and soul out into the world through the medium of this wonderful creative goody that we have been blessed with. Mike Dennis is an example of this phenomenon.

I was first exposed to Mike Dennis when I happened to play as his support in The Moon in Cardiff earlier in the year. I had no idea what to expect and like a Christmas trampoline in winter I was blown away. Mike is a striped magician, sat atop his cajon surrounded by a mass of cables running from various flashing boxes. His polite and smiley demeanour serves as a disarming ploy to anyone listening to him for the first time, be warned this humble gent is about to blow your tiny mind and make you feel things you didn’t think you could feel.

His primary instrument of choice is the violin which only further serves to arouse curiosity and induce confusion as what to expect. You take notice and are compelled to stand close, his unconventional ensemble of instruments and goodies are enough to capture anyone’s imagination and that’s before he sets off on an energetic flight through his musical repertoire.

There’s a step-by-step process leading into his set that begins with delicate, slight of hand tricks like a timely tap on the cajon, a caress of the cowbell or bashing of buttons to begin assembling in-depth, nuanced backdrops to the audible splendour that is about to take place. Each one is another step of the piper, hypnotising you, compelling you to move closer and take note – his movements increase in speed and you find that you’re trying to watch each move so that you can identify the new ingredient within the music.

As the sounds build so this passionate musical column begins to sway like a tree in the breeze with limbs dancing around, brushing across all of these different noise makers, the ingredients soon bond and you can identify rhythm and shape and you might be inclined to say ‘ah, well this makes sense now’ but that’s all part of the disarming ploy that comes with a smiling, striped stranger leading you on a journey that’s about to shatter your understanding of music because once all of the pieces are there and Mike is content with the musical playground that he has constructed all around it is time to play, there’s very little warning other than the split second in which it takes him to ready-up that violin of his and then before you know it he’s attempting to saw it in half but before you can begin to compel the level of passion and precision of this high speed mesmerising arco-techture he goes one step further and introduces a seamless juxtaposition of immaculate iambic that makes you take a step back because it’s all too much to process, but that lasts only a few seconds before you realise that you have to listen to it.

His stunning array of perfectly performed tracks adopt subtle influences from across the board of hiphop, grime, classical (which I admit to know nothing about) and as I have already argued, punk. His chosen subject matters vary from catastrophic issues of global concern like firearm ownership or war to feeling misled as a child by a parent picking you up from school. This ebb and flow of subjective severity keeps you on your toes and transitions you from wanting to cry to wanting to get livid to wanting to ring your mum, all in the space of about half an hour. Then, this audaciously talented individual pulls out I Want Everything – a beat-following monologue of dreams that pierces the hearts and mind-brains of all audience members and transcends everyone to a plain of shared belief and hope. On one hand it’s a shopping list of aspirations and hopes and on the other it’s a sequence of golden and unpossible ideals that we all aspire to, the type that don’t seem so beautiful and sadly unobtainable until you hear them all out loud.

I have seen grown men weep to that piece, I might even be one of them – but shut up, because it’s beautiful.

By the end of any live Mike Dennis experience you won’t be able to define it, your brain will be reaching for words that are arguably all applicable but incapable of doing it justice, he’s a musician sure and he’s a hip-hop artist (for those who don’t like hip-hop artists to be considered musicians) and he’s a beat-poet, he’s a narrator of social injustice and commentaries, a documenter of relatable childhood mishaps, an empathiser, a dreamer, but a dreamer who brings things into reality, literally in front of you. There are theatrics, I for one have seen him perform twice and I’ve left the venue with more to feel and think about than most plays or films I have ever seen.

Oh shit, and then there’s the fact that he’s been working on a new album this year and if you’re as lucky as me (which you aren’t) you might have heard it already because it’s not due to be released through digital means (Spotify, Itunes, Bandcamp and I guess Myspace) until November 1st.

This is, I want to say his fourth album, the first being Tired, Inspired, Fired (so relatable) – Edge In Wordways is made up of fourteen equally sublime tracks that not only capture thoughts, feelings that we’ve often all had but also shows off a continuously advancing skillet in musical composition, creation and arrangement. I’m convinced that between working on albums Mike Dennis is just collecting XP and levelling up his skills before heading to wherever he goes to put them down then put them out. There’s so much going on, beautiful mixing, vocal layering, including a fourth wall breaking cheeky little retort about a hilarious joke right at the start of a particular track. Collaborations, delicious wompy bass, oh it’s gorgeous. I can’t do it, I can’t review it or critique it like an actual professional and I’m not even going to try anymore… track 10 though, fuck yeah.

I don’t want to be a swinger good god no, I’ve only got guts when I’m on the mic…

…I was going to make an analogy about painting but as I listen to a certain track on the album now Mike Dennis has literally just made it for me so you can just listen to that instead – that’s how good he is, he’s pre-empting my writing in an album he’s already written. No wonder it’s been so difficult to try and sum it all up – forget it, I quit, he’s too good and there are no words.

Not that it will mean much to you lot yet but I do have a favourite on the new album, I’m not telling you what it is but it breaches my impenetrable firewall of feels and shatters my core, in the same way that up until now only the Shangri-La’s have been able to do. I reckon if I see him perform this live I will have to put a bag over my head.

So, I’m not entirely convinced that I’ve said anything of any substance in all of the words above but the point is that you have to go and see Mike Dennis perform, I implore it. Look, here’s a list of dates and places so there really is no excuse! You’ll leave wowed, inspired, optimistic and charged – it’s like therapy but fun. 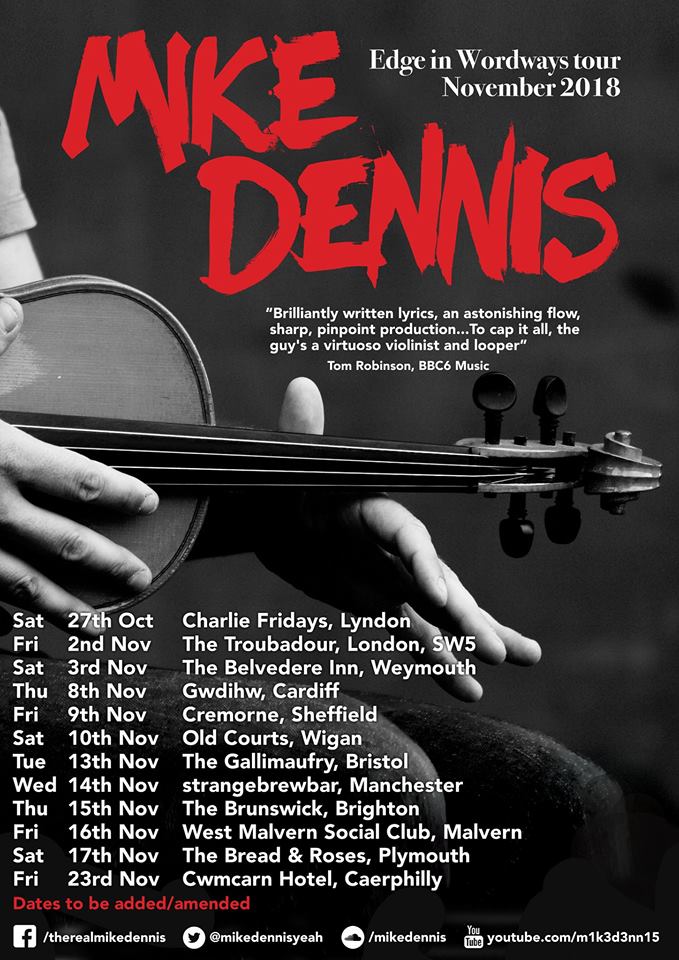 A gig in a recording studio, quite a culturally important studio, both Portishead, Dummy and Massive Attack, Blue Lines were recorded here, two iconic moments in the musical history of Bristol, iconic albums which will […]

LOOPS IN THE SECRET SOCIETY