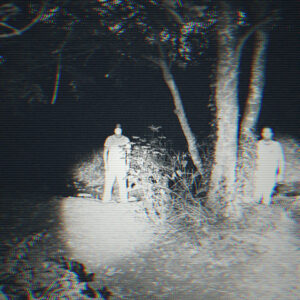 This prolific pair from Penarth bring us an audio onslaught akin to apocalyptic omens and impending dread. 3113 is concise, focused and unsettling. Is it a track or a warning? It brings about the idea that Matik & Eskay have opened something they shouldn’t have. Like the Arc of the Covenant. But instead of melting Nazi faces they’ve unleashed an unknown entity into the world – an entity that will come to us in the form of Altered Myth’s music.

Following the band’s success in a global band battle competition they’ve obviously decided to push further and harder and in doing so have (un)knowingly unleashed a tendrilled beast, the likes of which HP Lovecraft would envy into the earholes of everyone.

If this tune is a sign of what is to come it sets about an eerie excitement and tingly nervousness… like when you reluctantly follow a hobo to see their alleyway art. It could be good. Or you might die. But you must know.

It’s up to you whether you want to live in blissful ignornace until the end of days, or you’d rather get an idea of what is coming for you. If you’re into the latter, you can follow the links below and allow the torment to trickle into your repsective hearing-mouths.

Our advice? If you value infallible rhythmn, a proponderence of metronomical dirge, smooth-cut but still jagged, with lead components possibly being hallucinated rather than present, you’ll swallow hard and head into the cave. Yeah they’re in a cave, I’ve decided. Soooo…. in ya go!

The corridors and offices of Shonk Towers are empty and dark. The causation, a global pandemic that has led to the extermination of most of our staff, with nothing more than an intern popping in […]

Alas, a component of my life I have missed this year is the ability to walk into a gig ‘ear-blind’ – It’s an amazing way to install new music into one’s mind. Clearly the solution […]